Ethnographic Art for the Discerning Collector!

An Ancient Culture of Africa: The Nok People

In today’s Nigeria, there are approximately 250 distinct ethnic groups, yet 80% are comprised of the Hausa, Fulani, Igbo, and Yoruba.  The Yoruba were never united politically but were the descendants of a grouping of kingdoms and cities fighting with each other dating back to the 5th century A.D. to the city of Ife-Ife.

Prior to the 5th century, the Nok culture flourished, dating back to the 6th century B.C., on the southern Nigerian savannah.  They are named after the village where the first artifacts were discovered in 1928.  The people knew how to cast iron, having discovered the process independent of others.

Sculptures excavated range in size from a few inches to nearly life size.  The statues have recognizable heads of a spherical or conical or cylindrical shape, with eyes that are the focus of the piece, with their pierced pupils and widely arched eyebrows and lower eyelids.  The navel, mouth, ears, nostrils were also pierced.  Features are highly detailed and headdresses are often quite elaborate.  Intense attention to detail in headdress, ornamentation, and jewelry, suggest a highly cultivated devotion to body ornamentation, yet many of the pieces ironically appear to depict ravages of the body:  ailments like elephantiasis, and facial paralysis Heads are often heavily emphasized suggesting a highly developed respect for intelligence.   The Nok sculptures are generally hollow and coil-built.  Over the centuries, the slip they were created with has eroded, leaving a granular texture, quite unlike the original smooth surface they were created with.  The Nok sculptures were formed in a unique manner, created by carving rather than additively, by building up the surface details.  Some suggest that, therefore, sculptors were heavily influenced by wood carvers.

Today’s scholars link the Nok people to the Yoruba culture stylistically and through their iconography.

Nok is an iron age culture that has been dated between 900 B.C. and 200 A.D. Archaeological artifacts have been found in Nigeria, primarily to the north of the Niger-Benue River confluence and below the Jos escarpment.

Sources for this blog entry include:  Africa by Ivan Bargna, pp.36-37, from the Dictionaries of Civilization series, Encyclopaedia Britannica, NOKCULTURE.COM, and the Met Museum site:   http://www.metmuseum.org/toah/hd/nok/hd_nok.htm.   Also, You Tube has an interesting video at http://www.youtube.com/watch?v=iVT–v-fAKw&xfeature=related 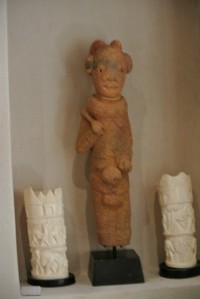 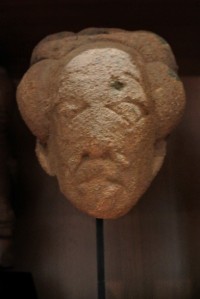 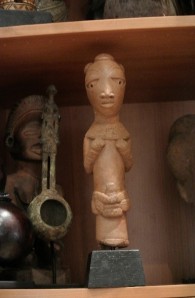 Chinese Minorities and Their Adornments